The MITER or the MITRE

From the Greek word μίτρα, "headband" or "turban", the mitre was not, originally, a bishop's headgear, but of consecrated virgins or abbesses.

The first mention of an episcopal miter dates back to 1049. Before then the bishops had no liturgical headgear and after that year it was used gradually  all over Western Europe till now. The miter symbolically indicates episcopal dignity.

The mitre is a kind of folding-cap. It consists of two like parts, each stiffened by a lining and rising to a peak; these are sewn together on the sides, but are united above by a piece of material that can fold together. Two lappets trimmed on the ends with fringe hang down from the back. The mitre is, theoretically, always supposed to be white. The official "Cæremoniale Romanum" distinguishes three kinds of mitres: the mitra pretiosa, auriphrygiata, and simplex. The first two differ from each other only in the greater or less richness of the ornamentation; the mitra simplex, or simple mitre, is one of white silk or white linen entirely without ornament. The fringe on the lappets at the back should be red. The bishop must wear the mitra pretiosa on those days on which the hymn Te Deum is used in the Office, the mitre auriphrygiata in the seasons of Advent and Lent, on fast days and during penitential processions, the mitra simplex on Good Fridays, at funerals, and at the blessing of the candles on Candlemas-day. 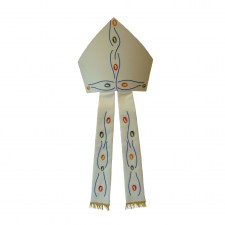 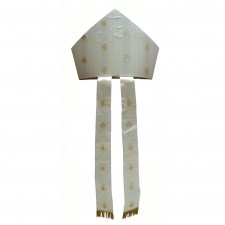 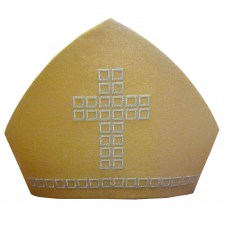