For Christians, the Cross is the symbol of the passion, death and resurrection of Jesus.

A distinction is made between the processional Cross, which is carried in procession in some particular celebrations and then fixed on a base in the presbyteral area, and the Altar Cross.

By the late Middle Ages large Crucifixes known by the Old English term “rood” and coming down from the church’s vault are visible above the altar in many western churches. Modern Roman Catholic churches often have a Crucifix above the Altar on the wall.

Righetti attests to a processional Cross that can be divided into two parts: the pole and the Cross itself. In this case the Cross was detached from the pole and placed on a small pedestal above the Altar. Thus the processional Cross became the Altar Cross (cf. M. Righetti, Liturgical History I, 535). It was at first almost always a Cross rather than a true Crucifix. In fact, it did not bear the image of the Crucifix, that appeared only around the 14th century. Initially Christ was represented with his eyes open and his head upright, to signify the anticipation of the Resurrection.

Even the Missal of St. Pius V simply prescribed "a Cross", while the Caeremoniale Episcoporum specified "with the image of the Most Holy Crucifix". The cross is honoured with bowing and incense and on Good Friday also with genuflection and kissing. (cf. GIRM nos. 274-277.) The processional Cross opens the celebration of Palm Sunday or Passion Sunday and is decorated with olive branches. In some solemn celebrations presided over by the bishop, the Cross opens the procession preceded by incense and accompanied by two candlesticks. 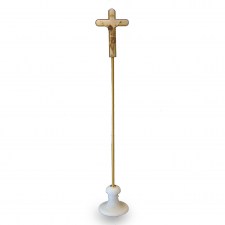 B12 01A - Processional cross in Wood / Corpo in Resin: Gold and Bronze Finish